Warning: "continue" targeting switch is equivalent to "break". Did you mean to use "continue 2"? in /home/buycoast/public_html/theconnollyagencyrealestate.com/wp-content/plugins/styles/classes/csstidy/class.csstidy.php on line 854


When buying a home, local market data and Realtor expertise make ALL the difference. We update the local market data quarterly here, so check back frequently. If there’s a town not listed here that you would like market data for, email [email protected] or give us a call.

The data below was compiled from the Monmouth-Ocean Multiple Listing Service (FLEX-MLS) and provides an overview of recent sales activity in Allenhurst, NJ.

For a comprehensive real estate market update in Allenhurst, NJ, contact our NJ Shore Real Estate experts at The Connolly Agency. We look forward to hearing from you. 732-361-0800

Allenhurst saw the sale of 4 single family homes during 2020’s first half. In these 6 months, the average home sale price is $1,553,725. Homes are still selling at 91% of list price; equal to this year’s first quarter. Homes are averaging 22 DOM; down from an average of 33 DOM during the first quarter of 2020.

Starting off the first quarter of 2020, Allenhurst saw sales of 2 single family homes. The average sales price of $1,732,500 represents the sale of a $415,000 and a 3 million dollar home. These homes were sold at 91% of list price, which holds consistently with 2019 comparisons to asking versus sale prices. These homes were listed with an average of 33 days on market, which is a slight improvement over last year’s average.

Only 2 homes were sold in 2017’s third quarter, with the average sold price being $2,225,000. The average days on the market around this time of year dropped tremendously from 113 days last year to 19 days this year. The homes were also sold for less than 3% off listing price.

Two homes sold during the fourth quarter of 2016 as compared to three for the same quarter in 2015.  The average sales prices of a single family home in Allenhurst was $705,000 for this period. Average days on market was slightly higher than normal at 178, but homes were selling for 98% of the list price.

The information is deemed reliable but not guaranteed. 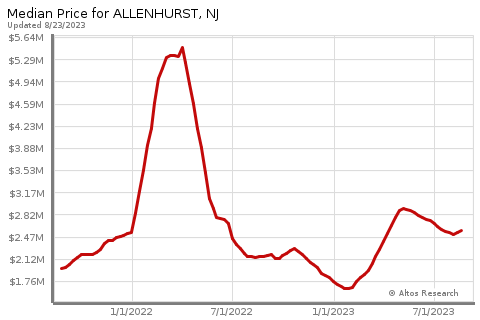 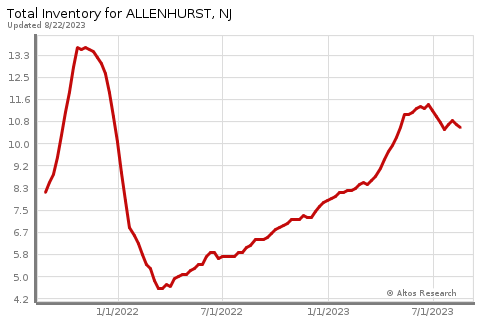